NASA’s Kepler space telescope, in concert with Cornell-led measurements of stars’ ultraviolet activity, has observed the effects of a dead star bending the light of its companion red star.

NeVER FORGET TO GET THE HOTEST MEME OF THE HOUR … by fun with science team : http://adf.ly/MPhKN 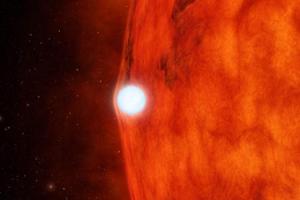 The findings are among the first detections of this effect — a result predicted by Einstein’s theory of general relativity — in binary, or double, star systems.

The dead star, also called a white dwarf, is the burnt-out core of what used to be a star like our sun. It is locked in an orbiting dance with its partner, a small “red dwarf” star. While the tiny white dwarf is physically smaller than the red dwarf, it is more massive. When the white dwarf passed in front of its star, its gravity caused the starlight to observably bend and brighten.

“This white dwarf is about the size of Earth but the mass of the sun,” said Phil Muirhead, Ph.D. ’11, of the California Institute of Technology and lead author of the findings to be published April 20 in theAstrophysical Journal, titled “Characterizing the cool KOIs: A mutually eclipsing post-common envelope binary.”

“It’s so hefty that the red dwarf, though larger in physical size, is circling around the white dwarf,” Muirhead continued.

Still in early phases and for which Cornell students are now being recruited by Lloyd, the GALEX program measures ultraviolet activity in all the stars in the Kepler field of view — an indicator of potential habitability for planets.

Graduate student and co-author Jim Fuller also did a theoretical analysis of the star system in the context of its future and past evolutions.

“This system is especially exciting because it allows us to accurately characterize the peaceful state of these systems before the violent mass-transfer phase begins,” Fuller said.

Kepler’s primary job is to scan stars in search of orbiting planets. As the planets pass by, they block the starlight by miniscule amounts, which Kepler’s sensitive detectors can see.

So far, Kepler has identified more than 2,700 planet candidates. Still ongoing is the mission’s search for planets similar to Earth in size and temperature that orbit a star like our sun. Ultimately, Kepler will reveal how common Earth-size planets are in the Milky Way galaxy.

To learn more about this particular star system, Muirhead and colleagues also used the Hale Telescope at Palomar Observatory near San Diego. Using a technique called radial velocity, they discovered that the red dwarf was wobbling around like a spinning top. The wobble was too big to be from the tug of a planet. That’s when they knew they were looking at a massive white dwarf passing behind the red dwarf, rather than a gas giant passing in front.

One of the consequences of Einstein’s theory of general relativity is that gravity bends light. Astronomers regularly observe this phenomenon, often called gravitational lensing, which has been used to discover new planets and hunt for free-floating planets.

In this new study, scientists used gravitational lensing to determine the mass of the white dwarf. By combining this information with all the data they acquired, they were able to accurately measure the mass of the red dwarf and the physical sizes of both stars.

NeVER FORGET TO GET THe Hotest MEME OF THE HOUR  … by fun with science team : http://adf.ly/MPhKN